After their parents passed away in 2013, I was invited to work with the Ghiatis family to help them sell the home they grew up in located in the historic neighborhood of Spaulding Square in Los Angeles.  The Ghiatis’ were the second owners of the home.  Their parents (Christos and Sofie) raised four children in the house with only one bathroom!

There was a magical quality to the home that seemed to smile at you as you walked up to it.  Chris and Sofie purchased the house from the original owner, the accomplished cinematographer Rudolph J. Berquist, who built the house as his personal residence in 1919. This diamond in the rough was just over 1,700 square feet large and sits on a spacious and sunny 8,100 square foot corner lot.

Update: 1400 Ogden Drive debuted in 2015 after an extensive renovation. No expense was spared to restore this home to its originally intended grandeur! 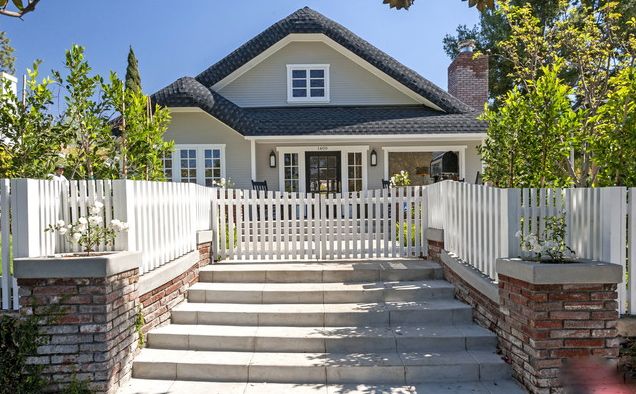 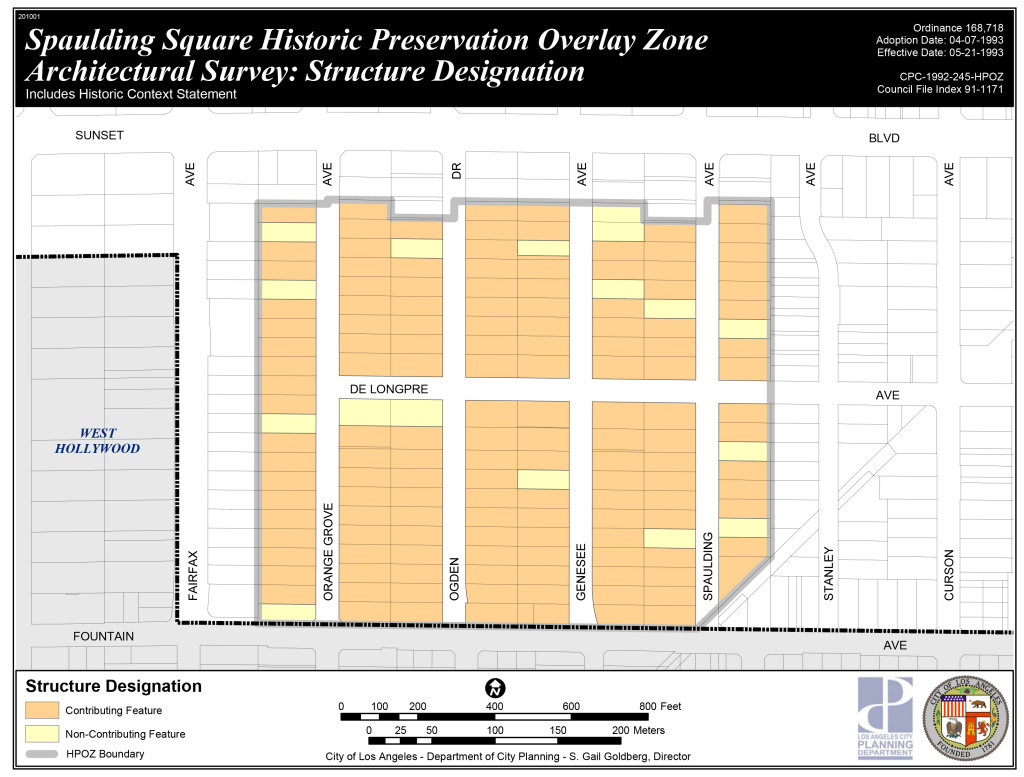 Spaulding Square is located in a Historic Preservation Overlay Zone (HPOZ).  An HPOZ is a designated historic district in the City of Los Angeles that recognizes, preserves, and enhances buildings and structures from a similar time period that have kept many of their original design features and/or have historic, architectural, cultural or aesthetic significance. The HPOZ is managed by the Department of City Planning and today there are over 20 HPOZs in Los Angeles. 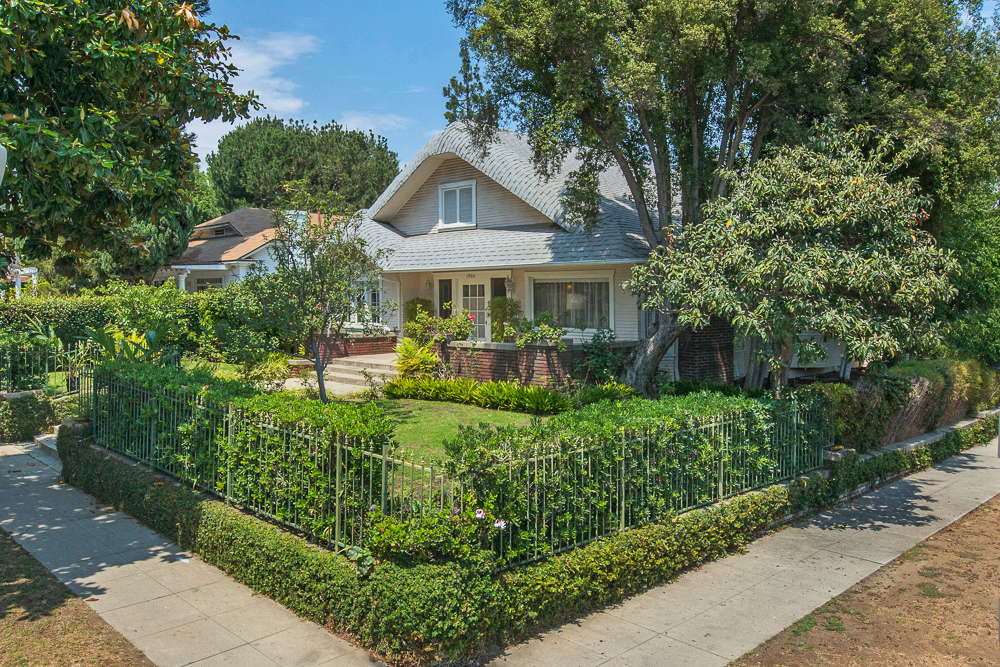 The home has a large inviting front patio that extends the length of the building. These large front porches are a signature design element of the Craftsman homes and many turn-of-the-century homes built between 1890 and 1920 in Los Angeles’ first streetcar neighborhoods. Perimeter fences were built more to establish property boundaries than for security. The house sat back on the slightly raised lot creating a comfortable and private distance from the curb with several mature rose bushes lining the walkway to the front door. In this picture (above) you can see a second floor window, which brought light into the large attic. 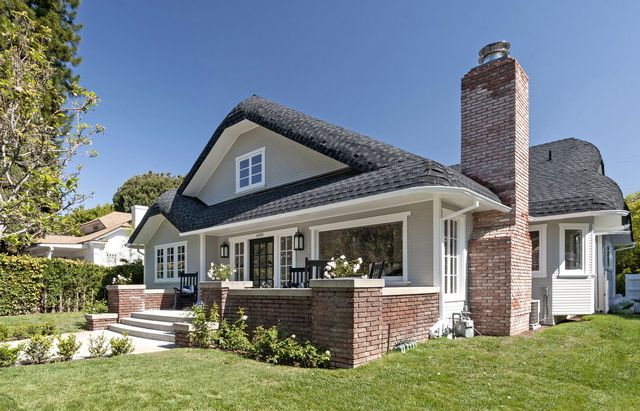 1400 Ogden after renovation. A necessary tree removal opened up the landscaping at the entrance. 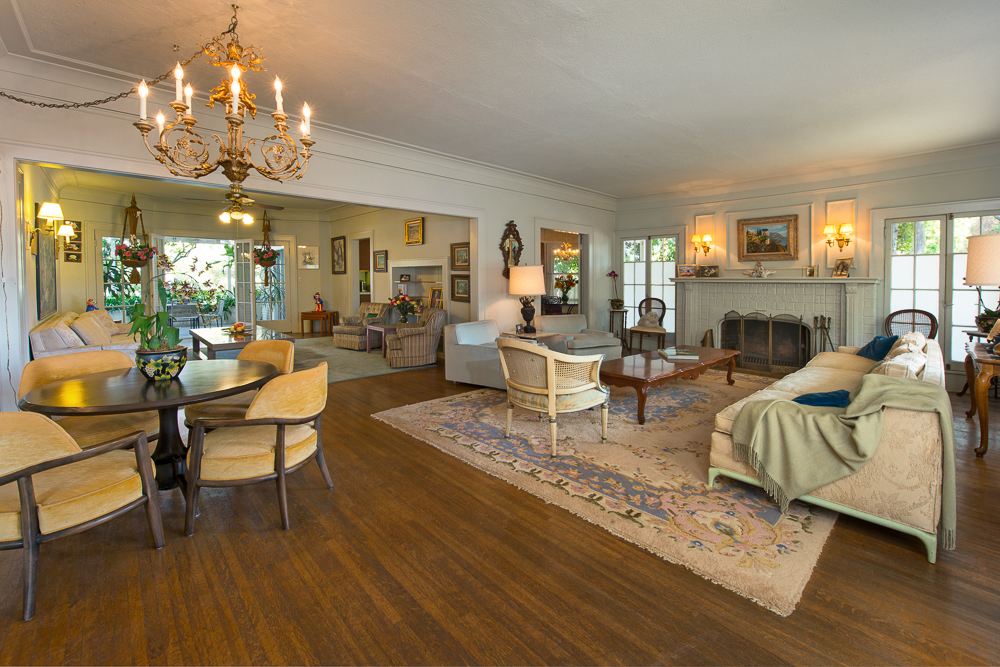 Many Craftsman homes, sometimes known as Arts and Crafts bungalows were meant to blend in with nature and were painted in neutral earth tones, browns, red-browns, greens and grays. The western exposure allowed sunlight to filter through the front windows and warm the entire home. This was how 1400 Ogden looked when it was sold in 2013. 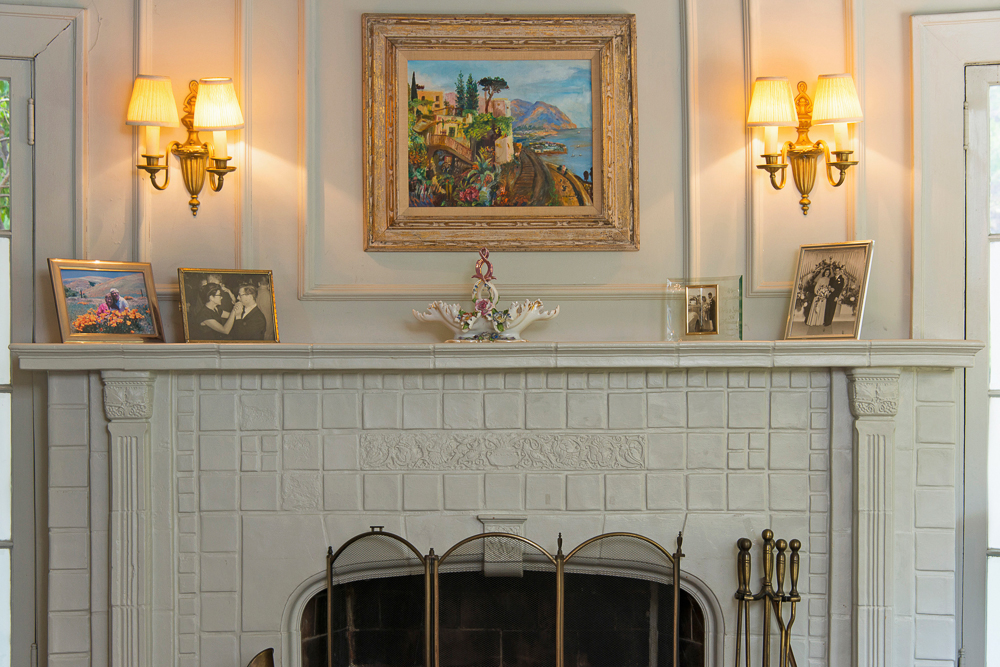 A great find was the Batchelder tile around the fireplace that had been unfortunately painted over. Ernest A. Batchelder was a leader in the Arts and Crafts Movement and made Southern California his home in the 1920s.  He was an educator and artist and his hand-painted tiles became very popular across the country as treasured touchstones from the period. On the mantel sat a number of life landmark photos of Christos and Sofie including one from their wedding day on December 5th, 1941.

Here’s the current look after the renovation that was completed in 2015. Note the Batchelder tile was restored to its original finish: 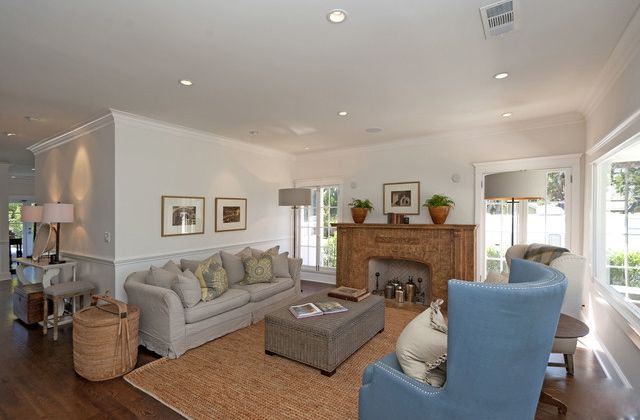 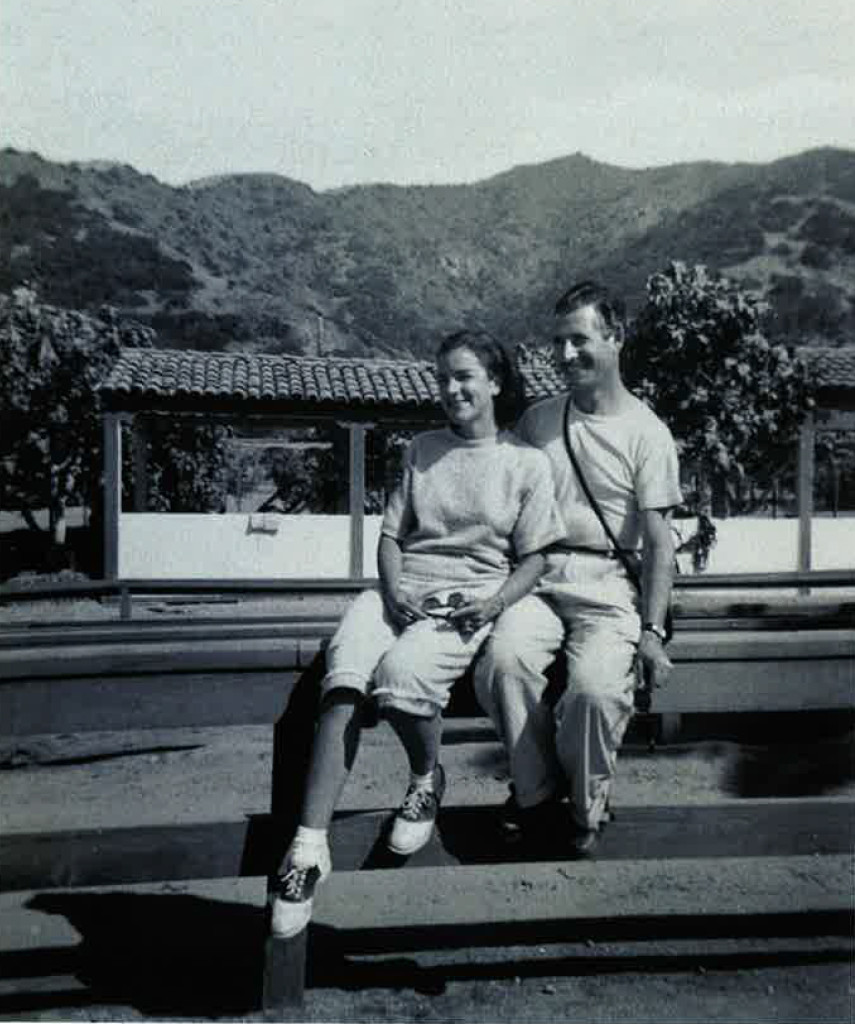 At a church fundraising event in 1939, Sophie met a handsome young man who purchased a raffle ticket to win a live chicken from her. He won the chicken and a date. When she excitedly told her parents that she had met someone named “Christos Ghiatis” and invited him home for (prized chicken) dinner, they were stunned. Soon Sophie and Chris were enjoying their first real date sailing to Catalina Island, chaperoned by her sister and brother-in-law, followed by endless evenings out, mostly dancing. They worked and even took art classes together. 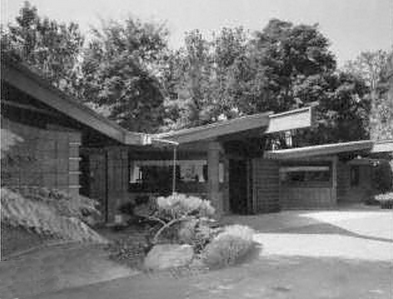 The 1940s saw the war come and go. Chris’ career was thriving from studio and haute couture (?), and they built their first house in Beverly Hills. In 1949, he co-designed and built in Beverly Hills’ Trousdale Estates at 1111 Sierra Alta Way (shown above). This architecturally significant structure was known as the Ghiatis House. 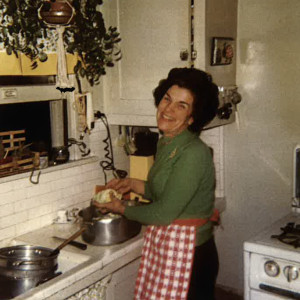 Sophie worked with Chris managing his business on the Sunset Strip, but eventually quit to raise the family full time. She helped with school projects and traded sewing classes for her kids’ music and sculpture lessons. Her constant encouragement and support was a haven and a blessing. Adopted friends, all still cherished today, became part of the family. Everyone was welcome around the gigantic round table that Papa built, and grew up on an endless supply of spaghetti, Greek cookies and love. Sophie (above) is seen cooking at the Ogden home before the 1970s kitchen remodel. 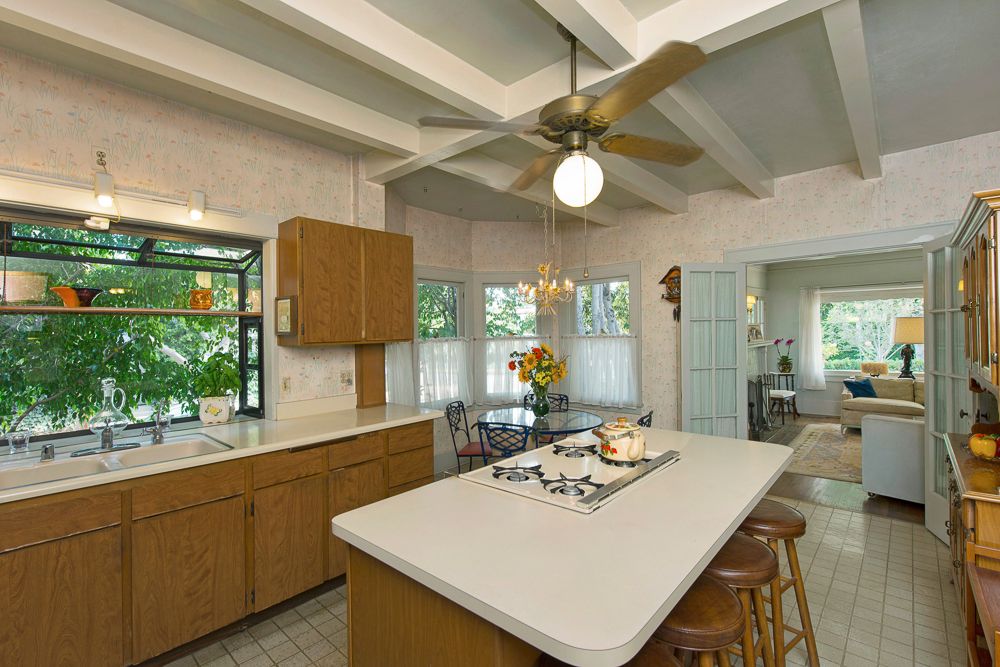 In the 1970s, Chris remodeled the kitchen with a large center island where people gathered daily. Mr. Ghiatis was hesitant about the new linoleum-flooring product and carefully saved all of the wood floors, which were neatly stacked in the garage for the last 50 years!

2015 Updated the kitchen with an island for additional prep surface, and an airy breakfast nook. That’s Calcutta Bella marble countertops. and top of the line appliances (Subzero, Wolf, Miele) completing a cook’s dream! 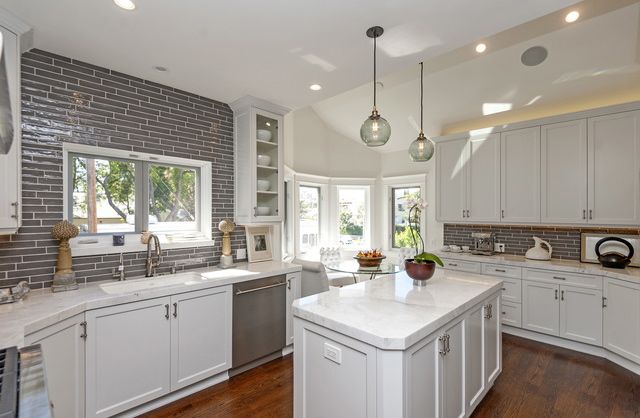 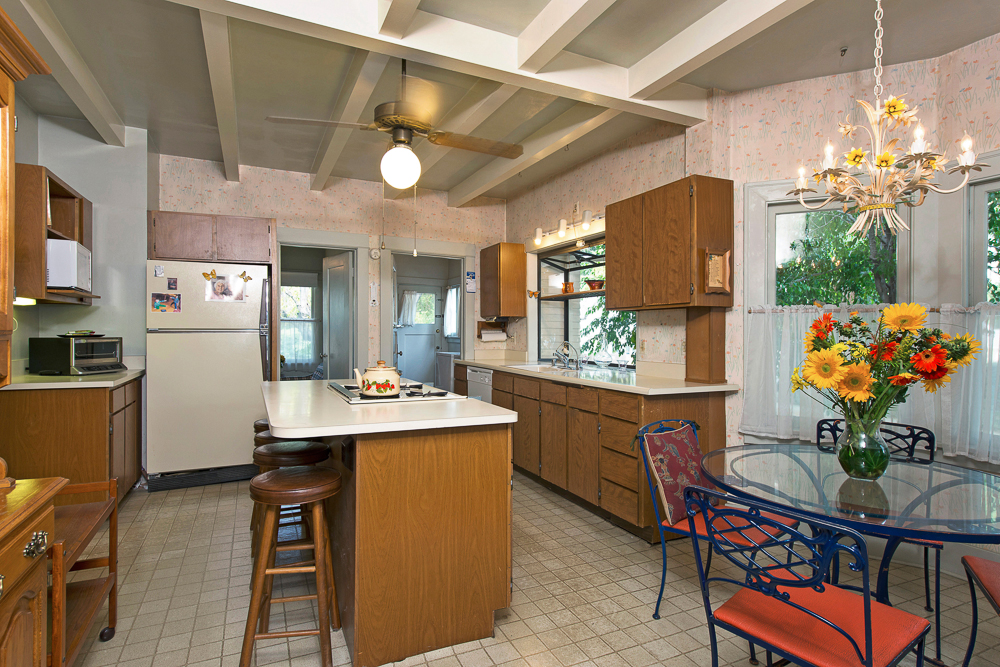 The floral wallpaper was a big hit, and the round kitchen table a popular place for morning coffee and afternoon tea.  The kitchen overlooks the side yard where tomato plants grew every year. Behind the kitchen were the laundry room and third bedroom. 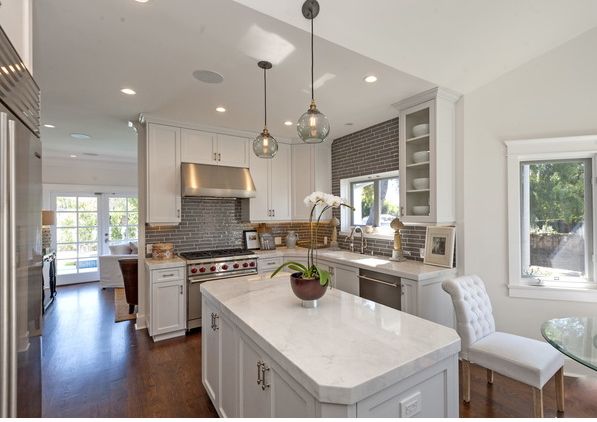 Here’s another current view of the kitchen. 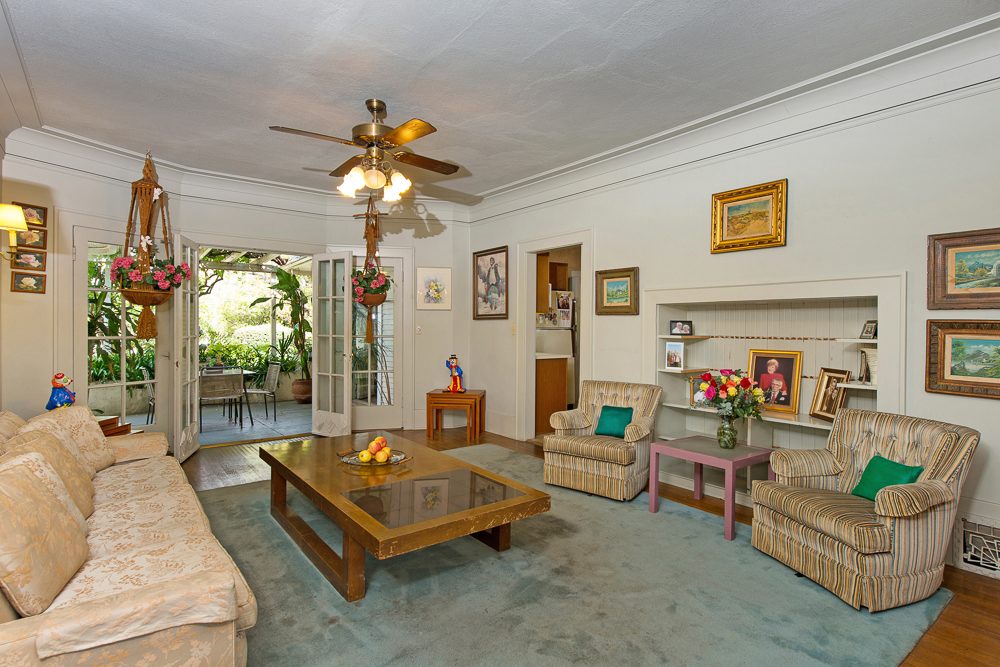 This den or sitting room off the kitchen was where the family spent many days and nights gathered with friends or to play games and tell stories. This was one of the epicenters of the home where you could talk to people in the kitchen, living room and on the back patio at the same time. For a smaller house the floor plan had a great flow. In his spare time, Mr. Ghiatis did woodwork and this coffee table was designed to open up into a dining room table. If you look closely, you can see where the side legs are touching and how the legs fold up under the table.  Very cool. 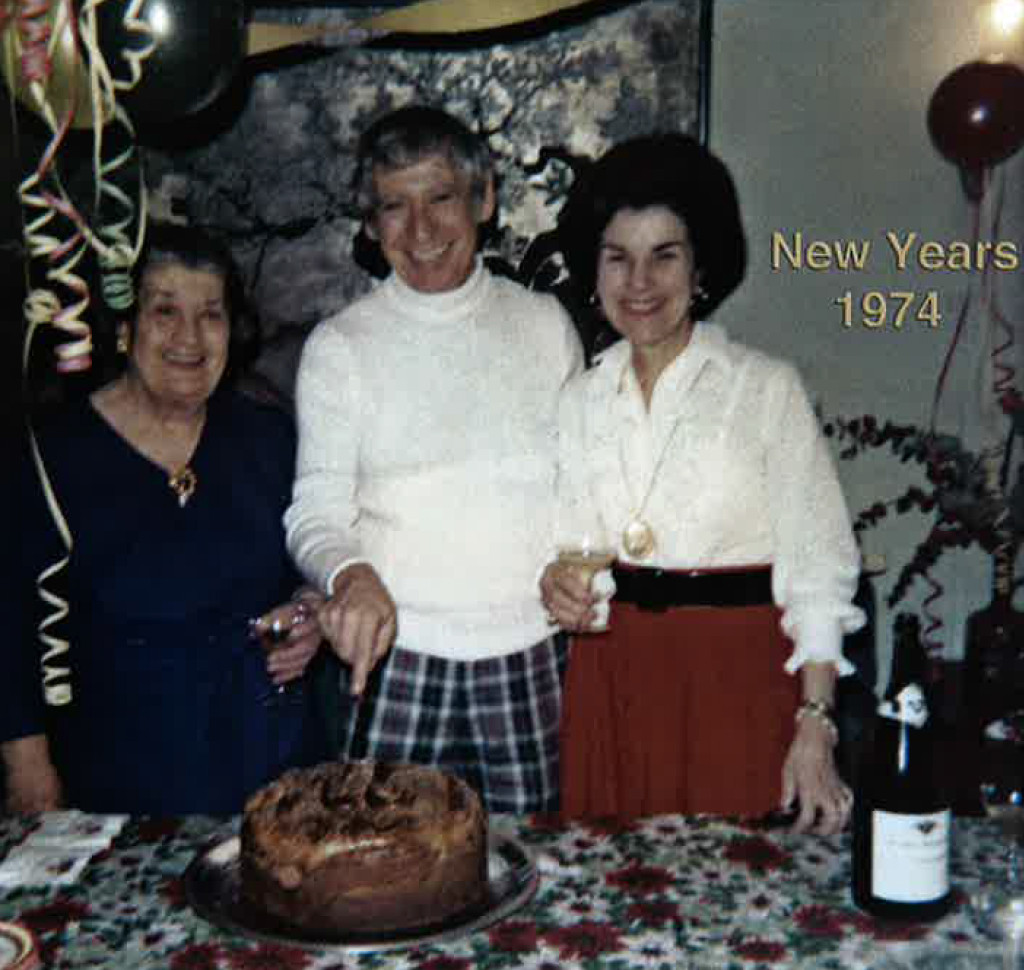 New Year’s Eve always started with a cacophony of noise from the front porch of 1400 North Ogden, followed by the blessing and cutting of the pita with a good-luck dime. 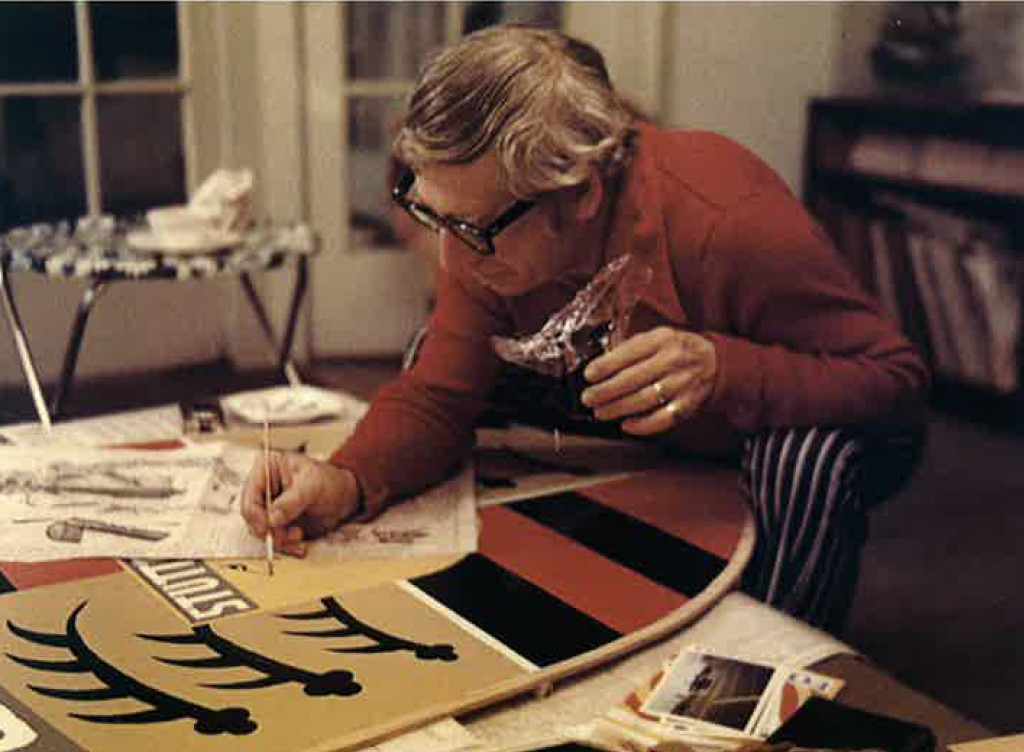 Mr. Ghiatis was an accomplished clothier who had a business on the Sunset Strip in West Hollywood and, from the 1970s through the 1990s, created fashions for bathing suits, wedding dresses, knitwear, sportswear and intimate apparel. He also dressed Nancy Reagan when her husband Ronald was governor of California. His work gained recognition by the Los Angeles County Museum of Art, the Fashion Institute of Technology and the Smithsonian Institute. In 1998, at age 81, he was forced to close his studio and retire only because of his declining vision. 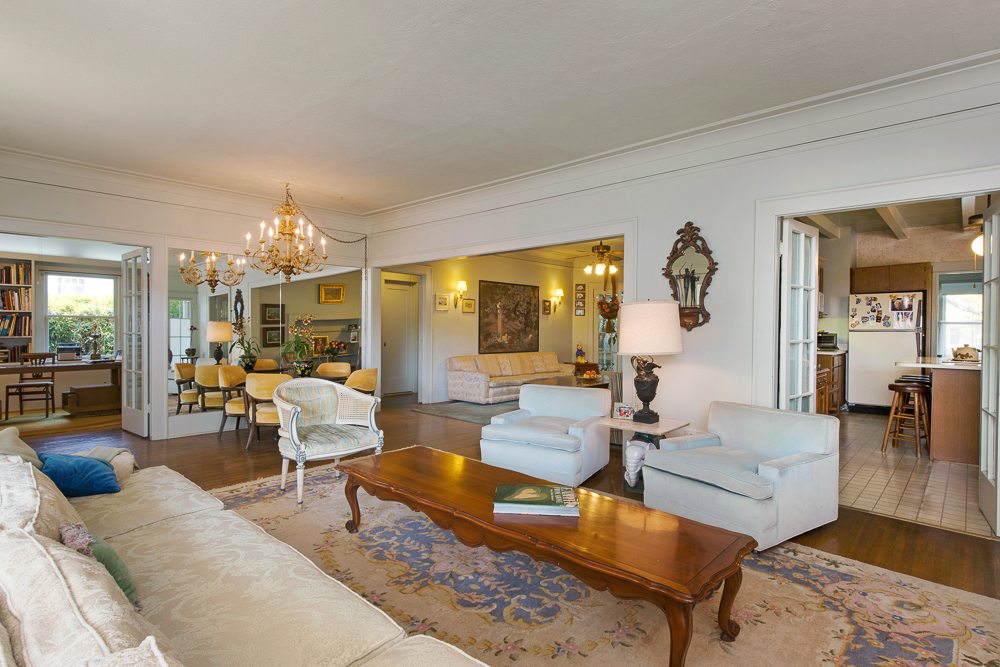 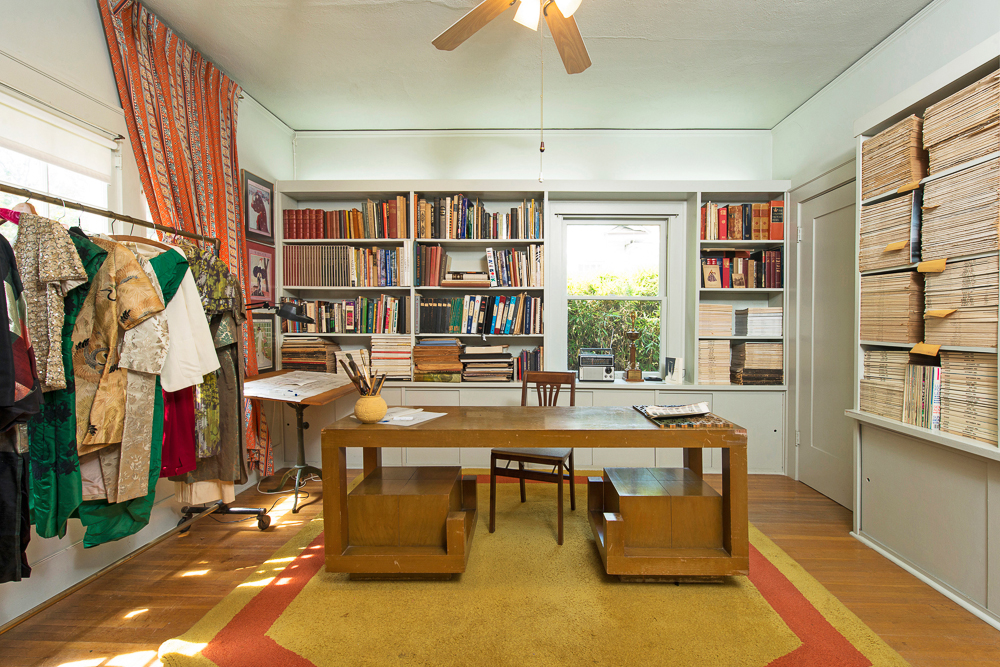 His office was full of reference materials, fabric samples, and personal drawings for new outfits. The family kept finding sketches tucked away in books throughout the house. Along one wall was a small portion of his complete collection of Vogue Magazine starting with issue #1. The house had a large basement where we found every issue with all the classic 1960s cover girls. The collection was meticulously inventoried by Ghiatis and is being kept as a family heirloom. 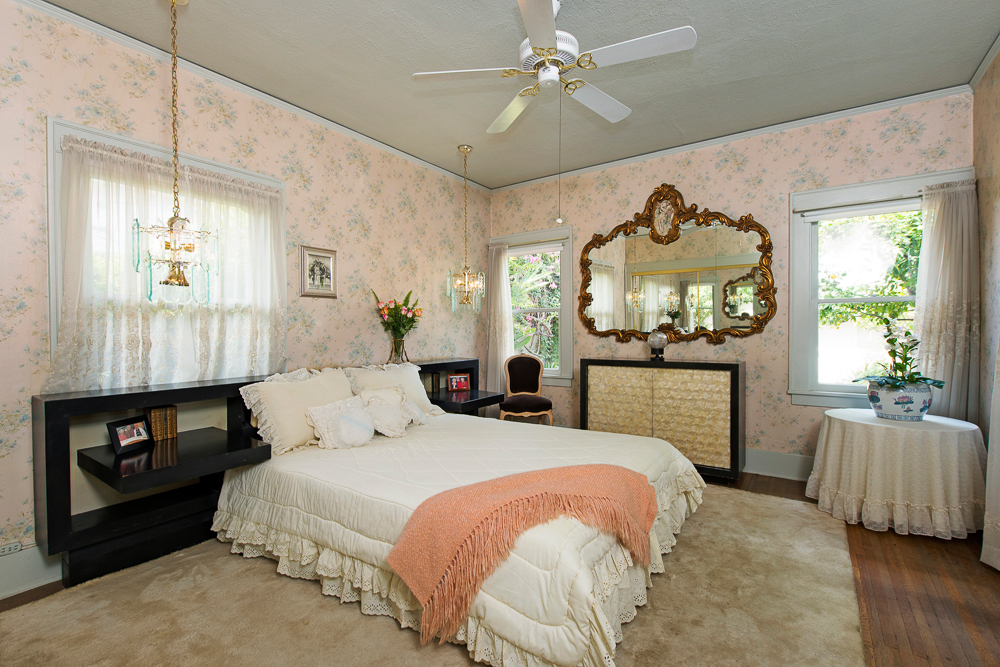 One of my favorite rooms in the house was the parent’s bedroom with two hanging bedside lights and floral wallpaper. This room was the farthest from all the other rooms in the house and overlooked the backyard – a very quiet and peaceful place. 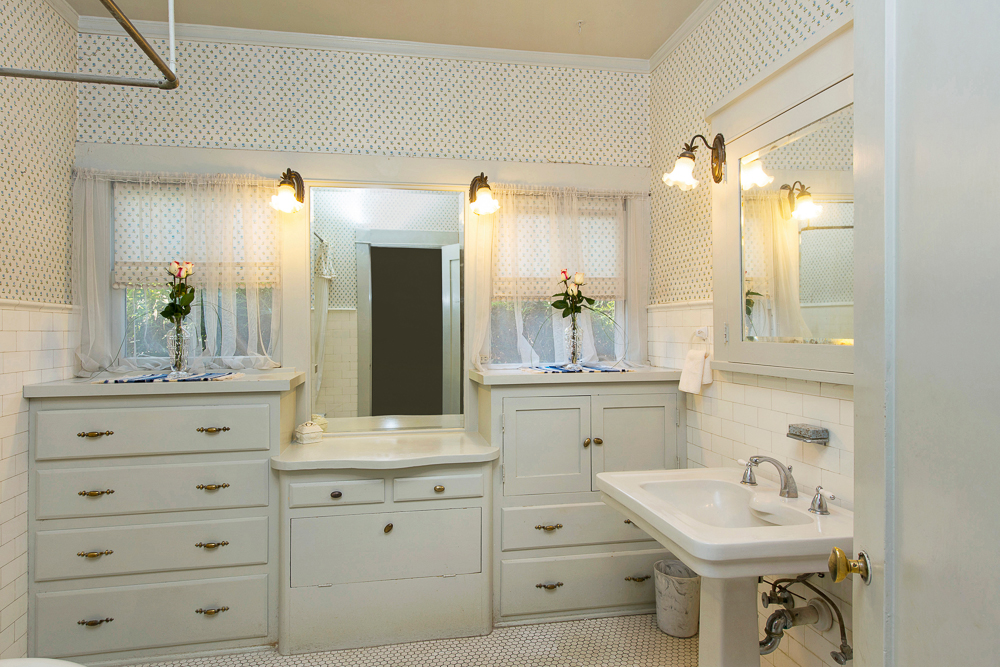 As I spent more time with the siblings, I was constantly struck by how close their relationships were, and they joked with me that “having only one bathroom makes a family closer.” 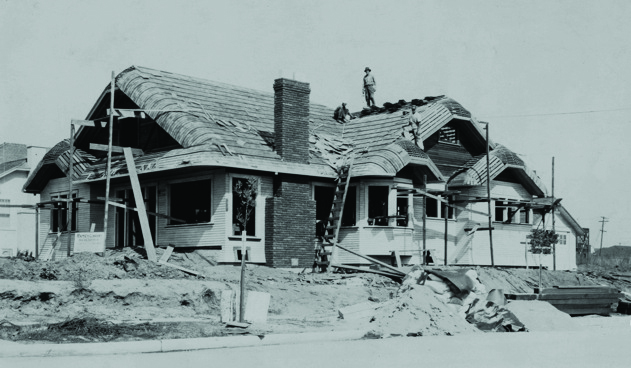 The Ghiatis’ had lots of information about the house and its history.  They were able to share some of the original photos of the house when it was being built in 1919 and some interesting information on the original owner of the home who was a notable cinematographer. 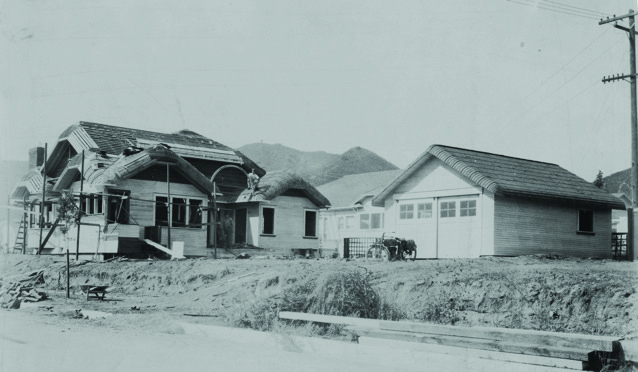 Yes.  That is a completely undeveloped Laurel Canyon and part of Mount Olympus in the background! 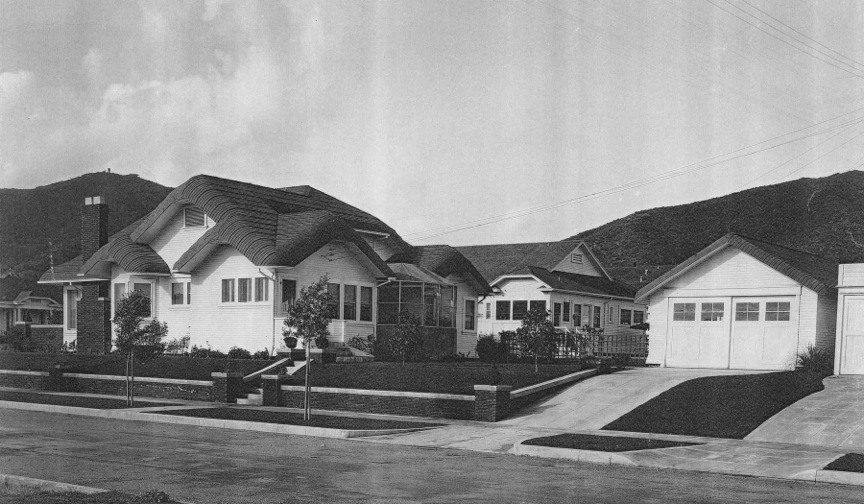 Here’s the home a few years later and you can see the small sapling trees alongside the house that today tower well over the roof line and create shade for the property. The house was completed by the Ramey Building Company on August 18th,1919 at a total cost of $4,950.

In the background of this photo to the northwest you can see the virgin hillside that will eventually become the East side of the Sunset Strip and one of the ridge lines of Laurel Canyon.

It was so rare to have these great old photos, which were passed on by the original owner, Rudolph J. Berquist. 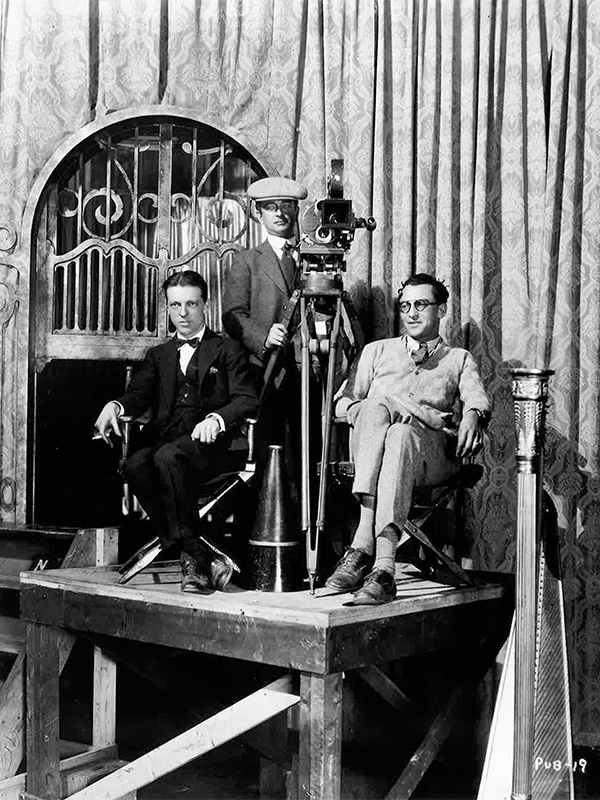 I was able to obtain a few old movie promotional stills of Rudolph at work from the Academy of Motion Pictures.

Tragically, Rudolph died in a car crash in 1923 at the corner of Santa Monica Boulevard and Rodeo Drive in Beverly Hills. He was working on a film and this was the second death on the picture.

The property received lots of attention when it hit the market with over 100 prospective buyers through the house in the first three days.  The sellers received multiple offers and the home was sold as-is. The new owners are restoring the property and were discussing the possibility of building into the attic to make a second floor master bedroom.   Sales in Spaulding Square have spiked significantly over the last 12 months as the commercial development of the Sunset Strip continues moving east towards Hollywood with new restaurants and apartment buildings.

In August, 1903, a petition was submitted to the Los Angeles Board of Supervisors requesting the incorporation of the City of Hollywood. The election for city hood was held on November 14, 1903 with voting lasting until 5:00 PM. After all the ballots were counted, the vote was eighty-eight for incorporation and seventy-seven against. Hollywood became a city with geographic boundaries extending from Normandie on the east, to Fairfax on the west, and from the top of the Santa Monica Mountains on the north to DeLongpre and Fountain avenues on the south. 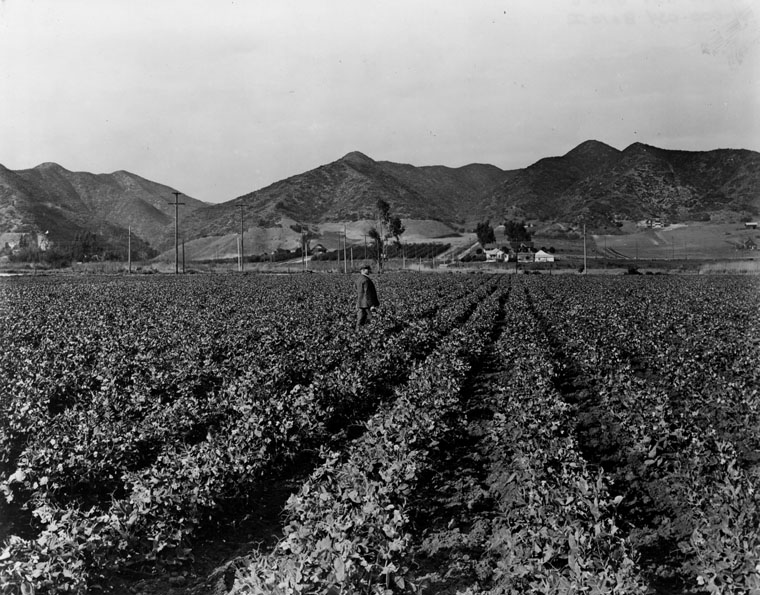 Circa 1901 – A Man walks through a sweet pea field located at about Fairfax and Sunset Blvd. 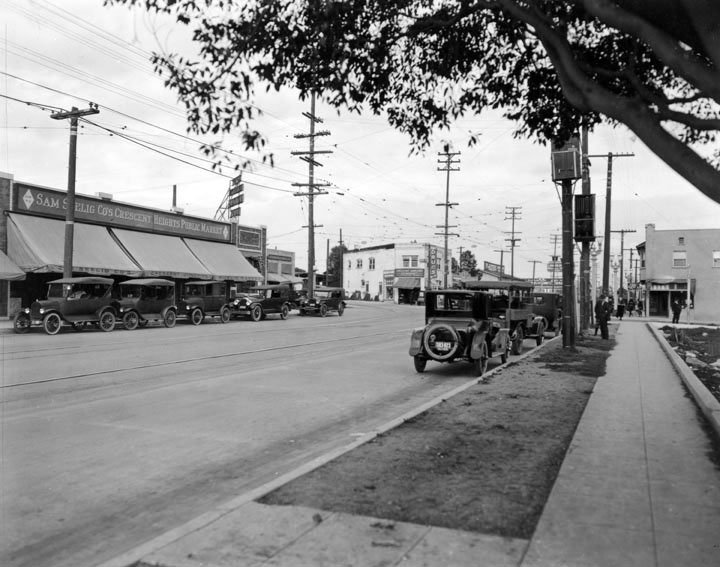 Sam Seelig Company was founded in April 1912 by Sam Seelig, who had come to California from Arizona in 1911. Seelig opened a single grocery store in Los Angeles at the corner of Pico and Figueroa streets. The chain had grown to 71 stores by 1922. After World War I, the firm became deeply indebted to its main grocery wholesaler, a firm owned by W.R.H. Weldon. In a swap of stock for debt, Weldon assumed control of the chain, leaving Seelig in charge of retail operations. Seelig then left the company in 1924 to enter the real estate business, forming Sam Seelig Realty.

As a result of Seelig’s departure, the company held a contest in 1925 to develop a new name, the result of which was Safeway. The original slogan was “an admonition and an invitation” to “Drive the Safeway; Buy the Safeway.” The point of the name was that the grocery operated on a cash-and-carry basis; it did not offer credit, as had been traditional for grocers. It was the “safe way” to buy because a family could not get into debt via its grocery bill (as many families did, especially during the Great Depression). By 1926, Safeway Stores had 322 stores centered in Southern California.*^